Home » 78-Year-Old Man Gets School Diploma After 60 Years, Reason Why He Was Denied Is Ridiculous 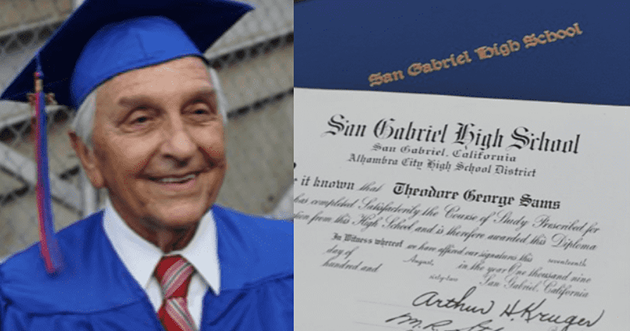 78-Year-Old Man Gets School Diploma After 60 Years, Reason Why He Was Denied Is Ridiculous

“Oh, yeah, I’m excited,” said Sams, though he was ‘just a little bit nervous about the graduation.

Ted Sams, 78, graduated from San Gabriel School on May 27, 60 years after he was in high school.

When asked about graduation he said, “Oh, yeah, I’m excited.” He was asked if he was nervous about the ceremony and he replied, “Ah, just a little bit, you know. But once I get in line and settled and all that stuff, I think it’ll be OK. The one thing that I’m really glad about is that it’s going to be over here pretty soon. “

When he was in high school was suspended for five days before the end of the school year for just “screwing around.”

He missed a final test because of the ordeal he made up during the summer. He told “When I went back with my grade. They wouldn’t give me my diploma because I owed $ 4.80 for a book and so I just walked away and said forget it.”

For years he has complained to children several times because $ 4.80 left him out of college.

After hearing the story of the father several times his children, daughters Sherry and Sally decided to do something about it. School staff found his 60-year-old diploma. After finding the principal, he asked Sam to be part of the Class of 2022.

His wife and daughters were present at the ceremony. Sherry said, “Actually, when he walked and got his diploma, every person on that stage hugged him and then the whole class applauded for him.” She added, “Everyone, and I think most of the people in the stands, too, were cheering and applauding.”

People should have such beautiful dreams and do the impossible to realize them. What do you think about this history? Share your comments on Facebook with us.