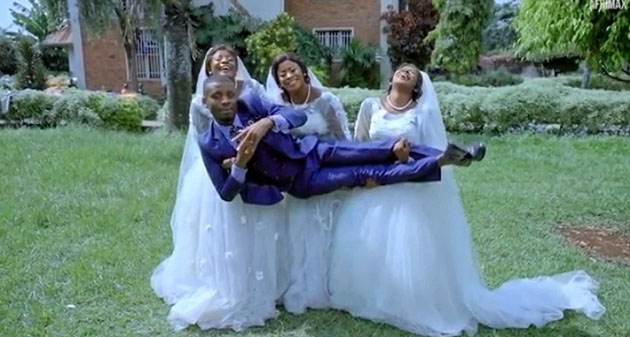 An Unusual Story, Husband Marries Triplets At The Same Time

An unusual event has taken place in Congo. A man is married with three twins at the same time. His name is Luwizo.

The 32-year-old first met on Facebook with one of the twins named Natalie where he fell in love with her and asked to meet her in person.

After Natalie introduced him her sisters Nadege and Natasha fell in love with the boy as well.

Wizo said that he was shocked when he saw two other women identical to Natalina so he almost fainted. It seemed like he was dreaming.

Since the triplets were very close and related to each other they decided to marry the same man.

The girls say that when they told Wizos that he should marry the three of them, he was initially shocked, but when they realized that they had fallen in love, this became easier.

The triplets have always shared their things and the husband would not be an exception.

The groom says that the parents do not talk to him and did not come to the wedding because his decision was not accepted by them. But love according to him has no limits and they must learn to accept this fact.

Many people were at their wedding where the triplets gave a speech where above all it is mentioned that they were very happy to get a three-man because in this way they will never separate from each other. The Lord heard their prayers.

What do you think about this story? How would you act if you were in the place of the boy’s parents, would you do something different? Share your thoughts with us in the comments below on Facebook.