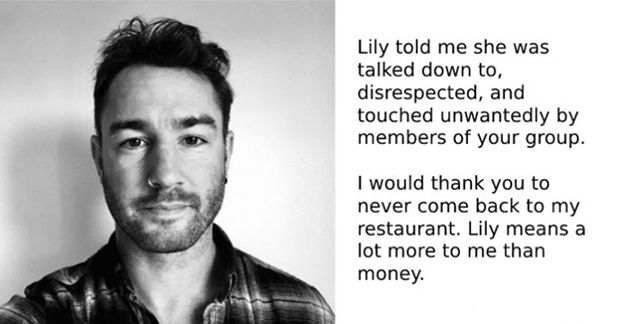 A UK restaurant boss named Lee Skeet will not allow a group of young people to enter his restaurant because they showed disrespect to his waitress.

He initially posted on Twitter where he wrote “I’m not clout chasing or looking for likes.

I just think we should start calling out rich people who think they can treat people like crap. ” The bunch of diners had mopped up the highest bill at his restaurant; $ 1,200.

He also sent an email to the people who were at dinner and did this kind of behavior saying:

Dear xxxxxxx, I wanted to firstly thank you for choosing my restaurant for your meal tonight, and I understand you had the biggest bill we’ve ever had on one table here. Unfortunately throughout the evening, I was made aware that your party’s behavior was inappropriate towards Lily, who runs front-of-house. ” “She has told me that as a 22-year-old-she she was talked down to, disrespected, and touched unwantedly by members of your group.”

The waitress was very embarrassed by this kind of behavior and he was heartbroken when she told him what happened and how he felt. This affected him the most because he himself was the father of a daughter.

“I have spent the last hour having conversations with her that break my heart, make me feel like as – t employer, and an appalling dad, having my own daughter. Please provide your bank details and I will refund your entire bill of £ 1000 minus £ 100 that I believe you should have tipped lily, which I will pay directly to her, as you left no tip. I would like to thank you for never coming back to my restaurant. Lily means a lot more to me than money. I also think you should assess the people you surround yourself with, Lee, ”he concluded.

His decision was to pay Lily. The boss congratulated him for the support he provided to his employee, not forgetting that she is also someone’s daughter.