Home » During A Live Broadcast, The Meteorologist’s Boyfriend Proposes To Her For Marriage 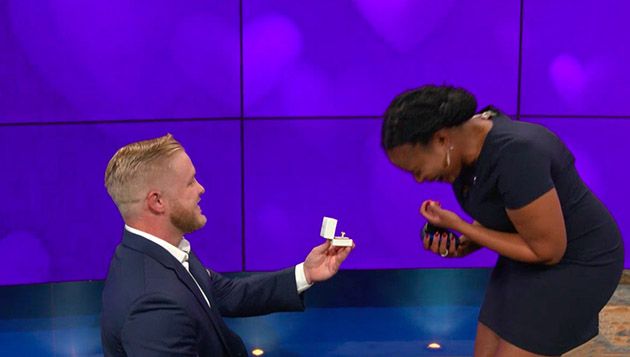 During A Live Broadcast, The Meteorologist’s Boyfriend Proposes To Her For Marriage

The story of Tawana Andrew a meteorologist in Louisville at WAVE3 was surprised by her boyfriend Rusty Steele when she proposed during a live broadcast.

For Andrew, this would not have been possible without the help of her colleagues. Initially, she was shown the picture of a ring on the screen with the inscription that it is time for my princess to turn into my queen. She was not understanding what was going on until Steel appeared on his knees and proposed.

She was very happy. Of all the emotions, she could not even keep his body on her feet when her boyfriend sat down to propose to her. Steele at this moment only showed love all the time. He said he was spending the best years of his life with her.

The time they had spent together had made them close and then they fell in love with each other. The answer to the proposal was yes and the two exchanged a very warm and happy hug. Then he did things with her telling her to continue introducing the weather.

Then all her colleagues congratulated her on the proposal and this important moment of their lives. Andrew realized that they too were involved in the surprise. They knew everything.

The couple has been together for more than three years. They thanked everyone who made their moment so beautiful. And we wish the couple to have a happier life together and God bless them.