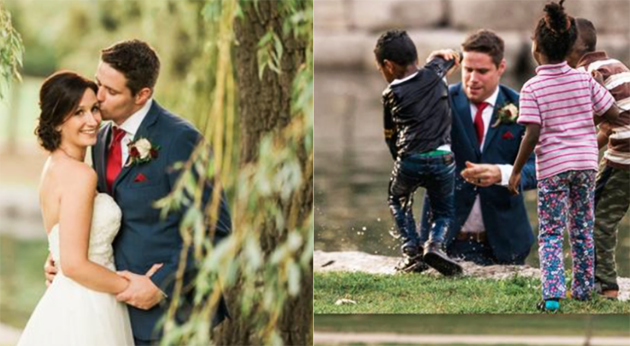 Groom Interrupts Photo Shooting To Save The Life Of A Child

Clayton and BrᎥttany Cook, from Ontario, were getting ready for their photos on a very beautiful bridge before going to the ceremony. For a moment Brittany turns her head and does not look at Clayton next to her. He was gone.

Clayton had run towards some children who were playing near the bridge thus avoiding a tragedy. He had noticed the children earlier and was not rolling his eyes. Suddenly what was expected happened.

One of the children fell into the water and could not swim. Clayton pulled it out without being too late. The moment was photographed making the couple very famous for their human action.

Despite Clayton being wet from the bottom down they continued the photo session. Brittany says that her husband’s gesture touched her a lot and his kindness is one of the reasons why she fell in love with him.

What would you do if you were in his place? Would you leave photo shooting to save someone’s life?