Home » She Says “I Fell For A Man After First Date”. She Met Him Online But Suddenly Things Became Weird 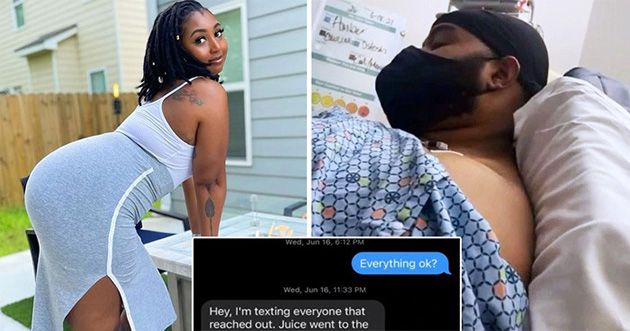 She Says “I Fell For A Man After First Date”. She Met Him Online But Suddenly Things Became Weird

Tinder Swindler’s tale on Netflix seems to have made everyone reflect and look at online dating with a different eye. Sativa Monet was also greatly deceived by an acquaintance she had in this form. We can not deny the fact that many people have met their wives, and girlfriends on Tinder, Instagram, Hinge, or even Twitter, but this was not the case with Monet.

According to her, her love story started to become so strange that she could not stay without sharing it with others.

The 28-year-old says she met a Twitter guy in 2021 and after exchanging some messages it seems like they fell in love. She writes “He was nice, and I thought we had a lot in common. So I started liking him relatively quickly.” At first, things went well, he came to meet her, and spent the weekend together.

They decide to spend another weekend together next month. As soon as she booked the flight he got on the phone to tell her that his cousin had been killed and that Monet could not go.

At first, it seemed strange that he did not post any pictures or writings on the Internet about his death but she didn’t think this for a long time. He told her that the funeral would take place on the same weekend and she needed to cancel the flight. They decided they would plan again another time.

When all this was over, he started talking about the problems he had with the law. Again two weeks before leaving another message was sent to her.

This time he told that he had to pay a fine and stay in prison for four days exactly the days when she had to go to meet him.

He suggested she go a week earlier and that he would reimburse all the money for canceling the flights. Again she agreed to do it.

Things started to get weirder when a few days before the flight he disappeared for 24 hours. Then suddenly a message came “HEY, I’M TEXTING EVERYONE THAT REACHED OUT. JUICE WENT TO THE HOSPITAL EARLIER TODAY DUE TO HIS SUGAR SPIKING. HE’LL HAVE HIS PHONE TOMORROW.”

Monet was worried about his health condition. But then she started thinking. She realized that all these maneuvers were not to meet him and to cancel the flight again. And the message that hadn’t been sent by him. The moment she was not returning his messages, things started to get weird.

Monet admitted she was then sent another text, alongside an image of this “Mystery Person,” as she called him. But after a quick thinking, she realized there were multiple indicators of the story not adding up. She said: “It was a live picture, and he moved at the end. The picture was taken in an ER. If he had been there for days, why didn’t they admit him?

However, Monet still has many doubts. Why did not any message come to him from another number that could be his cousins, mother, sister, or brother to inform him about the situation but only from his phone?

So far, Monet’s story has sparked outrage on Twitter, with many tuning in the story. However, she has promised to reveal what she found after doing some research.

What do you think about online dating? Have you had such experiences? Share your thoughts with us in the comments on Facebook.