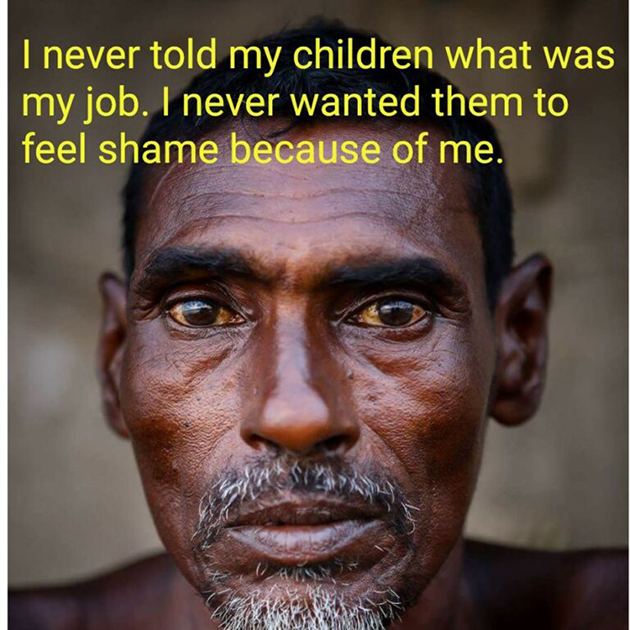 A man had never told his children what he did to survive. One day the little girl asked him and he answered calmly and with tears in his eyes.

He was a laborer. Every day before going home, he stopped at a public restroom and washed himself so that his children would not see him dirty. It was important for him that his daughters were educated and went to school.

He wanted them to have respect for themselves and not to be seen differently from others.

Every time he got money, he didn’t buy a blouse for himself but bought books for the girls. “I only asked that they earn my respect in return for our relationship. I used to work in cleaning.”

It was the day the little girl was going to apply for college and the payment hadn’t been made yet. That day the man did not work.

“I was unable to work. I was seated by the trash can, making a concerted effort to keep the tears from escaping my eyes. My coworkers were all staring at me, but nobody approached me to start a conversation. I was miserable because I had been unsuccessful. When I came back home, my daughter was going to confront me about the cost of admission, and I had no idea how I was going to answer her. My family has a low income. My belief was that a person with a low income could never have anything nice happen to say.”

When your coworkers finished turning and you saw him sad, they approached you and told him what he had. He explained how the work was and they gave him the day’s earnings. The man was very happy and hurried to go home. This time he did not take a shower but simply changed his clothes out of happiness.

His three oldest daughters are now in college and work on their own to pay for it. Only the little girl works part-time.

Today the little girl helps her father and all his friends. When asked why she is doing this, she says:

“All of you starved for me that day so that I could become what I am today, pray for me that I can feed you all, every day.”

When you have such a child, how can you be poor?