Home » The model Amber Luke confesses the trauma caused by the tattoo in her eye from which she was left blind! 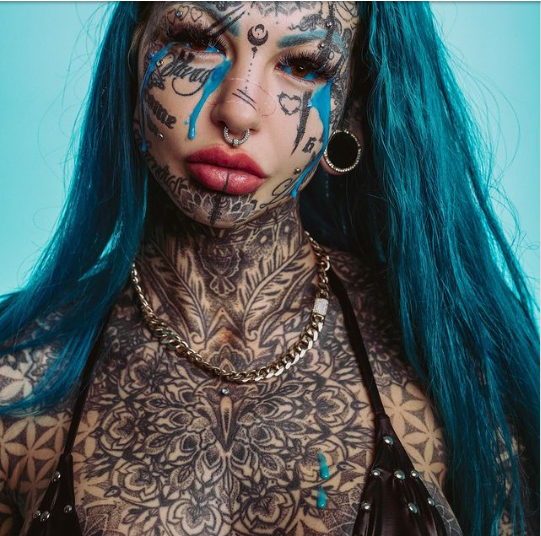 The model Amber Luke confesses the trauma caused by the tattoo in her eye from which she was left blind!

A model who has covered almost her entire body with tattoos has shared with her followers the bitter experience when she decided to get a tattoo inside her eyes as well.

Amber Luke was temporarily blinded and even cried blue tears, an experience that made her vow to never do extreme body modification again.

According to ‘The Daily Star, the incident happened when the model was in her twenties. Luke has spent over $90,000 on body modifications over the years, doing different things since the age of 14, and now has over 600 tattoos covering 98% of her body.

Despite being covered from head to toe in a number of different tattoos and piercings, the social media star had never experienced anything quite like her head tattoos. Since the event, Luka has written a post on Instagram stating that:

The excruciating procedure required me to endure four syringe injections in each of my eyes. I cried blue tears for two days after the procedure was done.

Trying to accurately portray her ‘struggles’, Luke got a tattoo of a woman crying with blue tears on her chest. Meanwhile, a man has revealed he is planning to split his genitalia in half as part of his quest to become a “black alien.” Anthony Loffredo, 33, has already undergone a number of procedures including having his upper lip removed, his nose cut and his tongue slit.

The 33-year-old Frenchman, who has been called “Human Satan” has covered his body with tattoos and piercings. Now he has announced to his 700,000 followers on Instagram that his next operation will be to split his private parts in two.