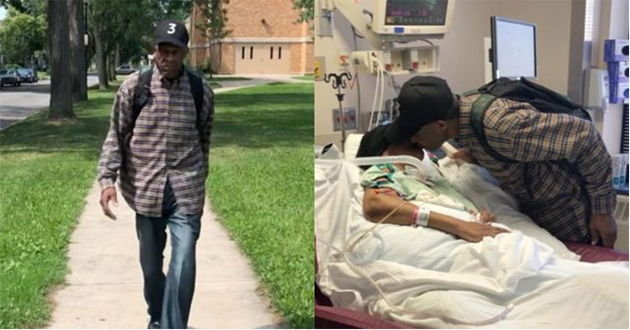 Luther Younger is a 99-year-old man so dear that in any weather he is always near his wife married for 55 years. He calls her the “sweetest cup of tea” and can not stay a single day without seeing her.

Luther’s wife, Waverlee, was diagnosed with a brain tumor 9 years ago and doctors gave her only 5 years to live. Despite this news, according to the daughter of the couple Lutheta, both parents have a very strong relationship with each other.

For nine years Waverlee was between the hospital and the house. Sometimes she stayed longer in the hospital than at home. Luther chose to be with her in all the difficult conditions she faced. Every day he went to kiss her and stayed with her, often sleeping on the floor. He walked to her every day.

Luther says he could take the bus but does not do so because while walking he prefers to think about his wife and clarify his thoughts. Since it has become daily on the road that follows, people approach and greet him and offer to accompany him by car.

He refuses. His daily walk is a mode to show the love he has for Waverlee.

He says that his wife treats him very well and has made him feel like a real man. She is a strong woman, just as he likes. Luther expresses with love that if it had not been her in his life he would not have succeeded.

It was she who in the most difficult moment took care of his children who weren’t hers. Meanwhile, he had to work. For this, he is very grateful. He would not have succeeded without her support.

Lutheta says that she wants to pick up her father on very hot or snowy days and drive him to the hospital. But he refuses. He says this is what keeps him alive.

He loves her mom very much. He would do anything for her.

What about you, when was the last time you made such a sacrifice or something similar for someone? Luther is always sad when he has to go home but what makes him happy is that the next day he will go and see her again.