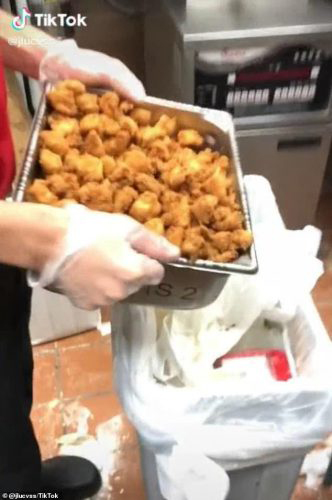 Now videos on how food is made have started circulating on social networks. An employee from Chick-fil-A, whose identity has not been disclosed, has shared a video on ICT TOK that has gone viral.

The video shows how the fast-food chain throws perfectly good chicken in the trash as the place is about to call the day quits. Apparently, this happens every day.

Many people who have seen the video say that food could be given to the homeless who have nothing to eat.

“What they do every night with the chicken nuggets at Chick-fil-A,” wrote the anonymous employee.

So far the fast-food chain has not yet issued a statement while the video has been distributed everywhere. A lot of people say that what the store does with their leftover food is at odds with their Christian values.

The video had 7.8 million viewers.

One person wrote, “The amount of food we throw away and the amount of starving people there just do not sit right with me.”

“Can confirm,” an employee commented. “We used to throw out SO much chicken…”

“Give them out for free, wtf,” someone added.

One person asked, “Why not give it to the homeless?”

Some of the comments are: “Give them out for free. What the hell. ”

“Jesus would not approve.”

“They think God is okay with this?”

“Wait, I thought that at the end of the shift, the employees get to take the leftovers home.”

“They should just let the employees take it home,” one person suggested.

Some people said that such a thing could not happen because Chick-fil-A is quite a busy place and they cook the fresh chicken all the time.

“All of you are saying it goes bad. It was made shortly before closing. Do you guys think they make them in the morning and just keep them hot? ”