Home » Giraffe Woman, Put For 5 Years Rings On Her Neck To Look Like Her Favorite Animal 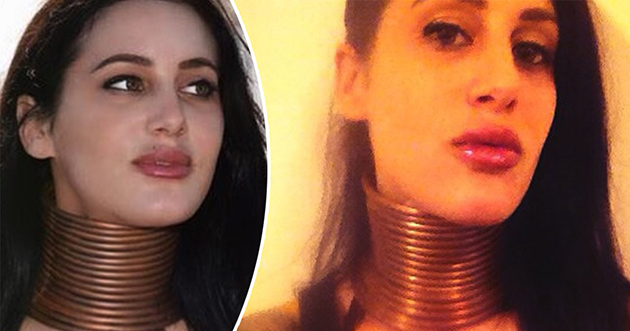 Giraffe Woman, Put For 5 Years Rings On Her Neck To Look Like Her Favorite Animal

Sydney Smith, a 35-year-old woman, has attracted attention on social media because of her appearance.

Friends have named her giraffe because of her long neck. But Sydney does not call it an insult at all. She has always admired her neck making her look different from the others.

But how did she achieve this? Put rings around her neck just like women in SouthEast Asia do to create the impression that they have longer necks than they normally have.

Her parents initially thought it would be a transitional phase but it did not happen. She was obsessed with wearing rings everywhere.

The Kayan women begin wearing the brass coils when they are five years old, believing that they enhance their beauty and serve as a symbol of their cultural identity.

Smith says “I was the first western woman (that I know of) attempting to stretch my neck.” For three years she wore self-made rings and her neck grew by 10-11 inches.

“I’d missed the relief from the pressure on the tops of my neck and shoulders and had been considering doing it again for a while,” Smith explained. “All I wanted was the comfort and exhilaration of this experience.”

Another moment when she was convinced was during a Lady Gaga concert, Smith was motivated by the singer’s “freak empowerment message” to be even more unique, so she got her rings redone by a friend before putting them back on.

Her stories are everywhere on the internet and people are curious to see how long her neck has stretched over time. People roll their eyes all the time and this has made it difficult for them to work.

“In the United States, I could not function as a long-necked woman with fifteen rings.” You could only do it if you were willing to utterly isolate yourself and never leave your house. In 2017, she says, “I spent five years of my life wearing rings around my neck, and I became quite reclusive and alone.”

“Some of you are upset to see me without the rings these days, but I believe I am progressing beyond them.” Accept me now or don’t accept me at all. With or without my rings, I’ve never been entirely accepted by the world. It’s the same in any case. What matters most is self-love. ”

According to her, keeping a name like Girafe Woman is not at all simple. What everyone needs is a little courage to do what they want without fear of the reactions of others.