Home » Identical Twins Share The Same Man, What They Ask From Him Is Impossible 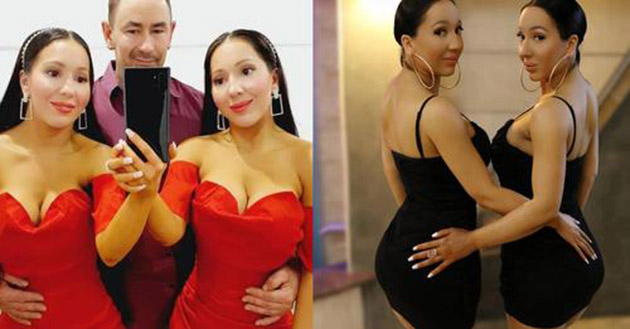 Identical Twins Share The Same Man, What They Ask From Him Is Impossible

Anna and Lucy DeCinque very famous twins from Australia do everything together. They sleep, eat, shower, and finally share the same man together.

They are apparently taking the sister bond to another level. They dress the same, eat at the same time, and are engaged to Ben Byrne, who is 40 years old.

Both have many plans for the future and one of them is to get pregnant at once through IVF. The twins have previously discussed the possibility of pregnancy at the same time and have taken it as a challenge. “Our mum’s actually convincing us to give birth naturally but I do not know how that’s going to work,” Anna said

Ben says all this will be a challenge. Both sisters also received matching rings. They have a special trio relationship. They got together in 2012 but wanted to get married and went to a place where polygamy was allowed.

The trio live together and have a bed where the three of them sleep with Ben in the middle. Anna and Lucy are so obsessed that they eat the food together and even the same amount.

‘You name it and we do it. We are never apart. I don’t think we’d function without each other. We have separation anxiety. We’re bound to each other. ’

The sisters are showing us another perspective of the strong bond the twins have with each other. What do you think? Is their decision normal? Share with us your comments on Facebook.