Home » Nurse Who Lost Both Legs From A Mine Does Her Wedding Dance With Her Husband, He Was Afraid To Lose Her 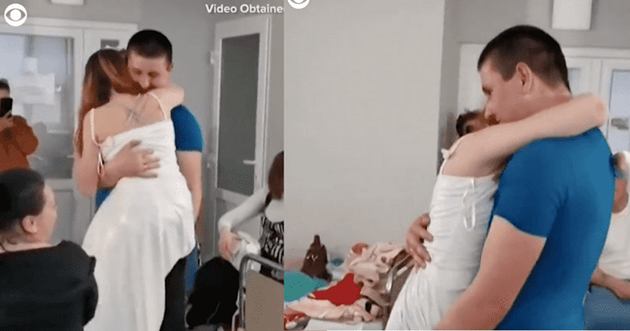 Nurse Who Lost Both Legs From A Mine Does Her Wedding Dance With Her Husband, He Was Afraid To Lose Her

A young couple got married last Monday and did a dance that touched everyone’s hearts. But this ceremony was a little different from the others.

Viktor Vasyliv and Oksana Balandina were married in a hospital due to the woman’s health condition. As she was returning home, a nearby bomb severed both legs.

At the time all this happened to Vasyliv nothing happened because he managed to come out unscathed. She at that moment had shouted to remove him from the scene.

According to him, this moment caught him suddenly. Not only that, his girlfriend was not moving anymore and he was so shocked that he did not know what to do.

He added, “If it was not for Oksana, I do not know what would have happened. She is so strong. She did not faint. It was Oksana who coordinated our actions.” Balandina has had four operations since then, and both of her legs, as well as four fingers on her left hand, have been severed.

She was badly injured both physically and mentally. He did not want to live anymore. Her children could not look at her this way.

But with the support of her friends and loved ones she learned how to live this way. At the moment, her two children, a 7-year-old boy, and a 5-year-old girl are living with her parents.

The couple got married in the hospital where the man held her in his arms and rolled her around the hospital dancing together. The man says that his dream has finally come true and that he was very afraid that he would lose it.

Losing in front of your eyes the person you love is one of the hardest things that can happen to you. Have you experienced any such losses before? Share with us your comments on Facebook.