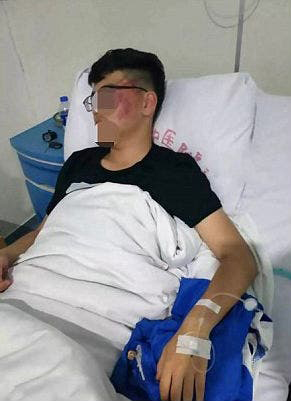 Parents demand teacher imprisonment for what she did to their son

Teachers have an important role in the life of each of us. Their main purpose is to educate children. But not everyone is inclined to become a teacher.

There are many who treat children with disrespect and offend them. An incident occurred recently in China where a student named Xiaochen came home from school with huge red marks on his face which resembled palm prints.

When asked by his parents what had happened he said the teacher had hit him hard 12 times. Xiaochen had been talking to his friend during a lesson where you are not allowed to talk and the teacher when she noticed him took him and slapped him in front of the whole class.

According to the other children, the teacher first hit a girl then Xiaochen. A few blood vessels near his eye burst and he is being treated at the hospital for the injuries that he sustained.

According to local magazines, the teacher was already dismissed by the Ministry of Education.

The school agreed to cover the boy’s hospital expenses. It is not known if a denunciation was made for the teacher even though the parents wanted such a thing.

When the story was told everyone agreed that such a thing should never happen. No teacher has the right to hit a child in this way.

There is always a way to solve problems without going into such aggressive situations in the classroom. What do you think about this situation?