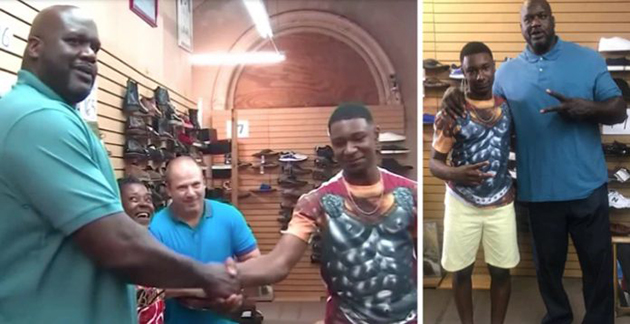 When Shaquille O’Neal wanted to go to prom he could not find shoes of size 18. His father demanded a lot until Friedman’s shop owner Bruce Teilhaber gave him a free pair.

Since that day O’Neal buys shoes only from him even though his size is now 22. As soon as he heard the boy’s case he remembered himself. Asked to help immediately.

Zach Keith A 13-year-old boy from Atalanta and basketball player has leg number 18. His mother Brittany has a hard time finding and coping.

When he asked O’Neal for help he was ready. WGCL’s Sharon Reed and O’Neal presented Zach Keith with 10 pairs of shoes, Keith and his family were surprised by the kind act.

His mother says it has been five years since the boy did not have a pair of shoes. This condition of his son was very difficult for her.

O’Neal says he remembers himself in the past. He said, “Bruce was there for me and I just return the favor that Bruce did for me.”