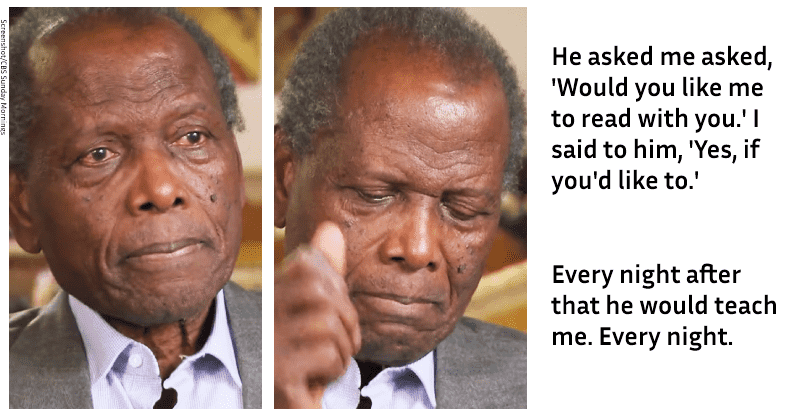 Sidney Poitier died last week at the age of 94. He was one of the greatest actors in Hollywood. He was the first black star actor and the first person of color to win an Oscar.

He pursued his dream from the Bahamas to New York but could not realize it because he could not read. To act without knowing how to read was impossible.

Poitier says he was a nice waiter who found time out of his free time to learn to read. Poitier cries every time he remembers it as a story.

At first, he washed the dishes in a restaurant and brought the newspapers. One day a Jew asked to read the title but he did not know.

“I sit there, and I’m reading one of the papers. And a Jewish waiter was sitting at the table, an elderly man, and he saw me there, ”recalled Poitier in the episode. “He got up, and he walked over, and he stood by the table that’s next to the kitchen, and he said,‘ Hi. What’s new in the papers? ’And I said to him,‘ I can’t tell you what’s new in the papers because I don’t read very well. I didn’t have very much of an education. ’”

“He asked, ‘Would you like me to read with you.’ I said to him, ‘Yes if you’d like to,'” he said. After he finished the shift they both sat down not to read.

“Every night after that he would come over and sit with me, and he would teach me what a comma is and why it exists, what periods are, what colons are, what dashes are,” said Poitier. He would teach me that there are syllables and how to differentiate them in a single word and consequently, learn how to pronounce them. Every night, ”said the actor getting emotional.

Poitier also says that one of the things he regrets is that when he searched the man it was too late and he could not thank him.

The actor has also paid tribute to the kind Jewish waiter in interviews with Oprah, on “60 Minutes” and also mentioned him in award acceptance speeches.

Gratitude is one of the best things a person can do. Thanking others for their help is never enough. We wish the soul of Sidney Poitier rests in peace.

Published in Hollywood and Stories