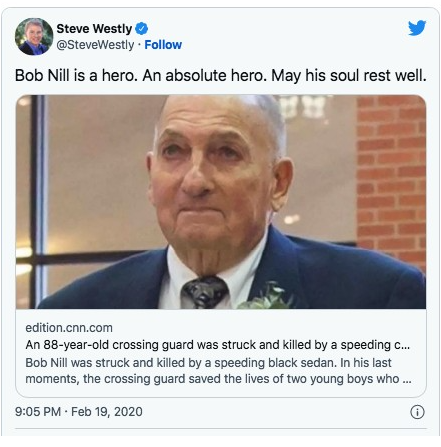 We don’t see heroes only in books and movies, but we also have them in real life. These people are simply like us, but they make sacrifices to follow their principles.

On Tuesday of this week, a crossing guard in Kansas City made the ultimate sacrifice in order to save the lives of several children who were in danger.

Bob Nill, 88, worked as a crossing guard at Christ the King Parish School for five years. The students loved him very much and called him “Mr. Bob”.

One morning at eight o’clock a black car was passing by the place where Nill was staying. He risked his life for them.

Cathy Fithian, the school director, says “He stopped [two youngsters], and they listened, thank God, but then he, of course, was the victim.”

When the car was passing according to the witness, Nill pushed the children off the road but had an accident himself. Randy, his nephew, commented that the brave deed was not out of character for him at all.

After this event, the school made a reaction on Facebook where it wrote Please allow us to fill you in on the latest information on our crossing guard, Mr. Nil. As we break the news to you of his passing, our hearts are heavy. Please continue to keep Mr. Nill and his family in your thoughts, as well as the children, parents, and instructors who were there during today’s event. In addition, we ask that you remember to pray for those who observed the incident.

Bob Nill rest in peace. You will always be remembered by those you saved and you will be a hero.