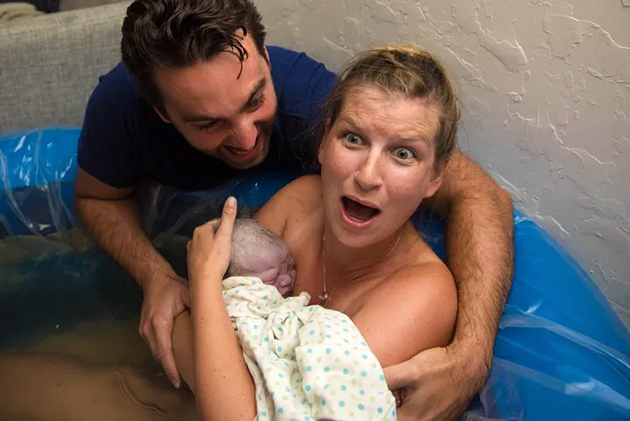 Kim Guiley was convinced that the second child would be a girl after a girl they had. But when they discovered the opposite, they were shocked.

Susannah Gill was a photographer who captured the moment when the mother was told the gender of the child. The emotion on their faces was very cute.

“It was a huge time because so much was going on,” Gill told The Huffington Post. “It was around 5 a.m. after a very long night,” says the narrator.

Kim gave birth to her first child at home and then took her to the hospital. Kim told HuffPost, “I was in severe pain.” “However, he was well worth the effort.”

Travis and Kim decided not to reveal the gender of the baby to be exciting. “The midwife wrapped the baby in a blanket and handed it to Kim, who took a glimpse.”

The gender surprised the mother, who had a 3-year-old daughter named Hazel. “Because her belly was showing in such a similar fashion to her first pregnancy, she was confident this baby was a girl,” she said. They thought it would be a girl because the shape of the belly was the same as in the first pregnancy.

“I work as a doula,” Kim explained, “so I should completely know better than to take a wild guess.” “I had all these foolish reasons, all these sentiments, why I assumed it was a female.”

Kim grew up in a family with a mother and brother and wanted her daughter to have the same experience.

Kim’s pregnancy was challenging, as she suffered from hyperemesis gravidarum and had to be hospitalized for IV fluids. “It required a village,” she added, “to get everything done and make sure my daughter’s needs were addressed at the time.”

Kim and Travis laugh when you see the photos with their reactions. “We couldn’t get enough of laughing.” I can’t believe my face has the power to accomplish that. Even if I tried, I don’t think I’d be able to duplicate that expression!”