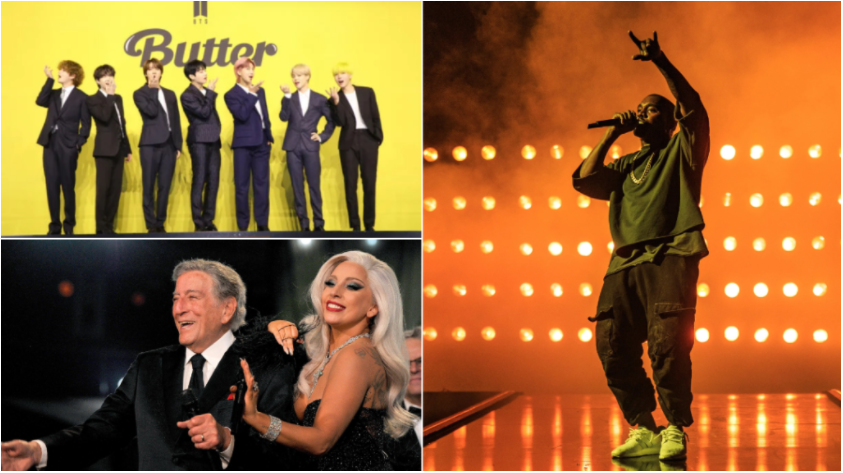 These 5 Artists Can Make History At The “Grammy Awards 2022”

After a delay of more than two months caused by an unpredictable pandemic, the Grammy Awards return on Sunday with a host of possible milestones.

According to CNN, these are the five nominees, some well-known names, while some other names are young people who are on the verge of making history.

Famous rapper Kanye West may be unwelcome this year as the performer of tonight’s Grammy Awards, but he will take a place in history if he surpasses the 23 victories of rapper Jay-Z – who has the most trophies so far as an artist of the hip hop genre. Ye has 22 Grammy Awards and has been nominated for five more, including one of the major awards, ‘Album of the Year for his album ‘Donda’.

The BTS boys’ group made history last year as the first Korean pop music star to win a Grammy nomination in the “Best Performance of a Duo / Pop” group. If their album “Butter” wins in that category this year, they will be the first K-pop group to win a Grammy.

Olivia Rodrigo has been nominated for seven awards for her debut album, “Sour”. Including major categories such as “Best Young Artist”, “Album of the Year”, “Best Song of the Year” and “Recording” best music of the year ”- the last two for her impressive ballad“ Drivers license ”.

If she receives all those awards, Rodrigo, 19, could become the second-youngest artist to be awarded in the four main categories of the “Grammy Awards”.

Tony Bennett first won the ‘Album of the Year award for ‘I Left My Heart In San Francisco’ at the fifth annual Grammy Awards. That was in 1963, and he’s still getting a Grammy a few decades later.

Bennett has five nominations this year for his collaboration with Lady Gaga, including the main categories “Album of the Year” and “Musical Recording of the Year”. The duo has been nominated for their cover of Cole Porter entitled “I Get a Kick Out of You”, a song was written about 88 years ago.

At 95, Bennett is the oldest person to ever release an album of new material – with some of his biggest hits to occur in the last decade.

Singer Jon Batiste tops the list of all artists nominated this year with 11 nominations for “Grammy” in various genres, including the main categories. “Musical recording of the year”, “Album of the year” and awards “Best Performance” jazz solo ”and“ Best R&B Album. ”If Batiste takes home at least nine awards Sunday, he will mark another milestone. Surpassing Michael Jackson and Santana as the most winning artists most Grammy Awards a year.