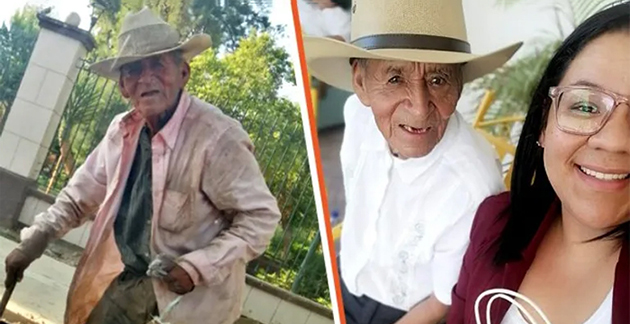 A woman decided to take to her house an old man wandering the streets. Benita Dearz noticed Felipe walking alone down the street. She stopped to ask him where he was going to take him by car.

The two began to talk to each other. There Benita learned that Felipe was 108 years old. He was married 3 times and had 11 children.

As soon as she heard this, the woman asked him why he was not with any of the children.

When she took him to his place she realized that he was alone. He lived under a tree on the corner of the road. Felipe’s condition despaired  Benita.

She asked, ‘why did they abandon him when a father or a grandfather is the most beautiful thing that life can offer you?”

She decided to help her. She gave him money and asked online people to help him. She invited Felipe to dinner at home and gave him new clothes. She offered her house to stay in. Her family got used to the old man and welcomed him.

In a new post, she shared with followers what Felipe looks like now. She wrote, “This is how Felipe looks, a new change, a little bath, and most important thing is the family dinner.”

With the action that Benita did, she seeks to honor the memory of her grandparents Angelita and Blas. One person commented, “You have a big heart, you deserve the whole world.”

What a beautiful story. This shows that there are still good people in this world. God bless all those who help people in need!